Doing business in Germany, which is Europe’s largest economy and the fourth largest economy in the world, is an appealing prospect, especially as Germany weathered the global financial crisis very well, with economic growth forecast around 2% for 2014 and unemployment currently around a low of 6.8%.

But, as with international business in general, cultural awareness is extremely important if a foreign business is to be successful in the German market. Businesses are well advised to analyze their own business culture, as well as that of their foreign trading partners, respect differences and accept that people do business differently around the world. 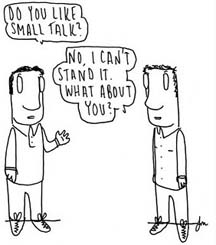 So why the headline “Germans don’t do small talk”? Because it gets to the point of what Germans are largely about, at least in a business environment. And Germans love to get to the point. Why waste valuable time with words that have no purpose or aren’t really meant sincerely? It all ties in with four key cultural values that Germans hold dear. These are clarity, time, structure and risk adversity, according to language and cross-cultural specialist Clare Gallagher of Vivid Meaning, who was speaking recently at a seminar at the City Business Library in London. Having grown up in Germany, I can only agree with her.

Germans will tell it to you straight, directly and precisely, which may at times be perceived as unpleasant or even rude by people from other cultures, but at least you know where you stand with a German. Things are crystal clear, and Germans appreciate the same clarity in return. Subtlety, understatement, embellishment, flattery, indirectness and waffle may be perceived as phony and even deceitful so you are wasting your time with them, and more importantly you are wasting a German’s time, which brings us onto the second key cultural value – time.

Germans are punctual and efficient, so time wasting of any kind is a no-no. Don’t leave a German waiting by arriving late to an appointment, and if you are running late then let them know as soon as you can. Don’t delay and always reply promptly to any queries. Germans like to get the job done to deadline and certainly before Feierabend (one of those untranslatable words which literally means “celebration evening” and refers to the end of the working day). So the division between work and play is strong in Germany and leads onto the third cultural value – structure.

In order for things to run smoothly and efficiently there need to be structures and systems. Things need to be organized. There is a time and a place for everything, which is why you don’t discuss the weather or your business partner’s well-being at a business meeting. That is the stuff for Feierabend when you are meant to socialize. Be careful how you address people. Unless you have been invited to do so, don’t use first names but address people with their title and surname. Germans like to keep a formal distance until they know you well, which is also reflected by the use of two words for the word “you” (du and sie) in German. First names and du are reserved for friends and people you know well, while surnames and sie are for everyone else. Then there are bureaucratic structures and systems that need to be adhered to to ensure things are done correctly, according to regulations and in line with established standards and norms. This also ties in with the fourth and final key cultural value – risk adversity.

Germany is an exporting powerhouse not because its products are highly competitive on price, but because they are renowned worldwide for their quality and reliability. They are hardly the cheapest, but they deliver what they promise, they work and they last. In order to enter the German market you will have to understand and meet German standards of quality and reliability. Then you will have your work cut out convincing German consumers or business partners to trust your product or service. Whatever claims you make about your product or service they need to be backed up by facts and figures. Just claiming to be the best without any evidence to back it up won’t get you very far. And competing on price alone is probably not enough either as quality will be very important to your German customer. Once you have gained their trust and built a good reputation, Germans will be very loyal customers and your business relationship is likely to be a long and profitable one.

Of course, all the above are sweeping generalizations and there are always exceptions to the rule. German business culture may also vary somewhat according to region and business sector. People in the Rhineland or Bavaria tend to be more jovial than in northern Germany, for example, and businesses in the information and communication technology sector are likely to have a more casual approach than traditional engineering firms. But by and large this summary of key cultural values holds true for doing business in Germany.

Simona de Logu is an experienced freelance interpreter and translator, specialized in GermanEnglish, but she also works with French, Spanish and Portuguese. You can find her on Google +, Facebook, LinkedIn and Proz.com. Her areas of expertise are economics, finance, business, politics and current affairs due to her previous professional background as a financial journalist.

Got something to say? Cancel reply